Turn Up the Heat! What can be done to save the U.S. heating oil market this winter?

One month into the heating season it is already clear the Northeast (states from the Mid-Atlantic north to New England) heating oil market could be under stress all winter. The proverbial “perfect storm” is brewing to make the next few months some of the more challenging for the global distillate market, especially the U.S. East Coast. A combination of demand recovery from COVID-19, project deferment and delays, and the Ukrainian crisis are tightening global distillate markets. In addition, refining capacity in the U.S. East Coast (PADD 1) has been contracting for about 15 years. As a result, PADD 1 now imports over 80% of its needs, mostly via pipelines from the U.S. Gulf Coast and Midwest. Like the rest of the U.S., distillates are used to fuel trucks, tractors, trains and marine vessels of every size. Diesel also can be used in power plants that can substitute it for natural gas. This fuel-switching is more common during winter when natural gas needs to be diverted to residential and commercial space heating; however, heating oil is a middle distillate fuel that also is critical for space heating in the U.S. Northeast. The EIA estimates that about four million households in the Northeast use 85% of residential heating oil in the U.S.

The current price level is a function of the rise in crude oil prices since mid-2020. It also reflects what the U.S. East Coast must pay to balance its market with imports (primarily from Canada) as the global distillates market grows increasingly tight. As the U.S. enters the heating season, the Northeast heating oil market is so tight we see record-high prices at a level not seen since the run-up in crude oil prices just before the Global Financial Crisis. 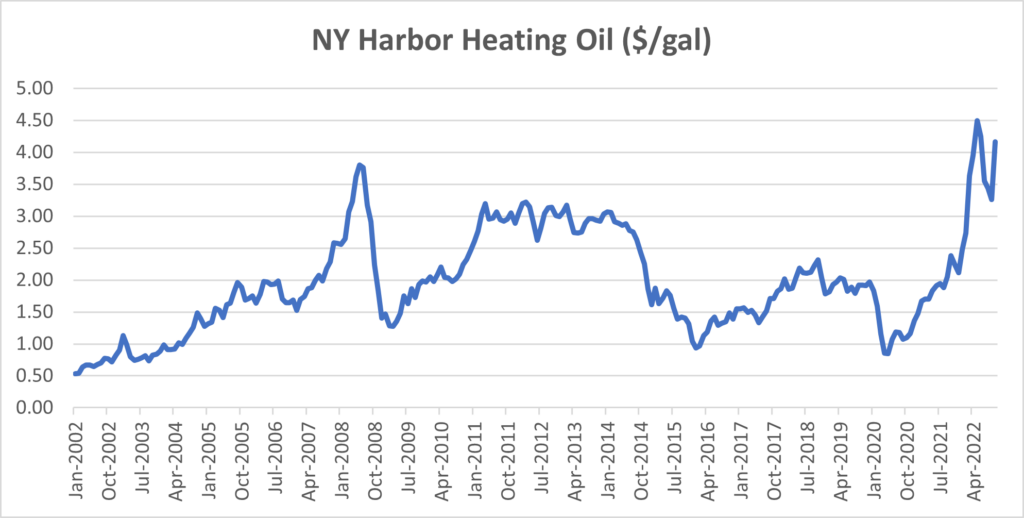 History may be set to repeat itself. The U.S., Japan, and Western Europe have been tightening sulfur specifications since the 1980s. Sometimes, production capacity lagged the timing of tighter specifications, resulting in price spikes. For example, part of the last heating oil price spike was driven, in part, by a global tightening of sulfur specifications in 2007. This latest price spike might be a delayed response to the last major tightening of sulfur specifications, which was the reduction of sulfur fuel from 3.5% to 0.5% by the IMO (International Maritime Organization) in January 2020. At the time, there were uncertainties around fuel availability and quality, with a back-of-the-envelope calculation suggesting a shortage of compliant fuel of 0.8 to 1 million b/d. The expert consensus was that IMO 2020 would inevitably increase fuel prices, but exactly how much would depend on supply and demand responses, as well as unpredictable geopolitical and economic factors. The economic lockdowns from COVID-19 were such an unpredictable factor. When road fuel demand collapsed (globally) in 2020, marine bunkers had less competition for lower sulfur materials; however, the rise in heating oil prices since May 2020, not only correlated with recovering crude oil prices, but also could be a delayed response from tightness in lower sulfur middle distillate markets from IMO 2020. 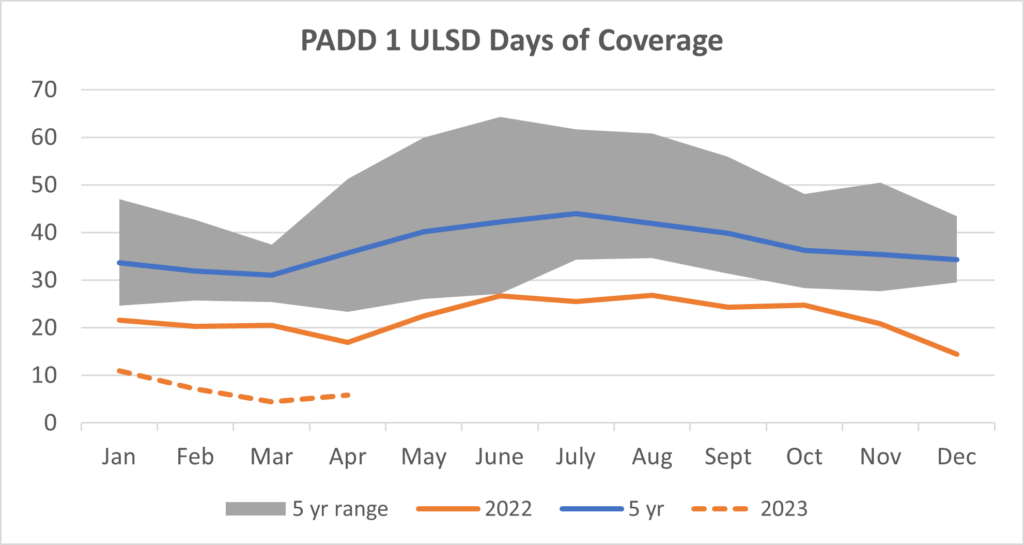 This wafer-thin buffer is of particular concern to approximately 20% of Northeast households using heating oil as their primary space-heating fuel. If the weather is colder than normal, the U.S. Northeast could see widespread fuel interruptions and rationing this winter. As a result, prices could increase to unprecedented levels. While there are several policy options that could mitigate such an outcome, it is important to understand that there is no silver bullet. All options come with trade-offs in terms of economic efficiency and/or environmental impacts.

What might be done to help alleviate some of this tightness? Some have suggested waiving the Jones Act requirement (a section of the Merchant Marine Act of 1920 requiring goods shipped between U.S. ports to be transported on ships that are built, owned, and operated by U.S. citizens or permanent residents) to increase the number of vessels that could transport fuel from the PADD 3 (U.S. Gulf Coast). If there were a waiver, low-sulfur distillate exports from PADD 3 (primarily to Latin America) could be diverted to PADD 1 ports. This has the potential to add about five days of demand coverage as seen in the chart below. 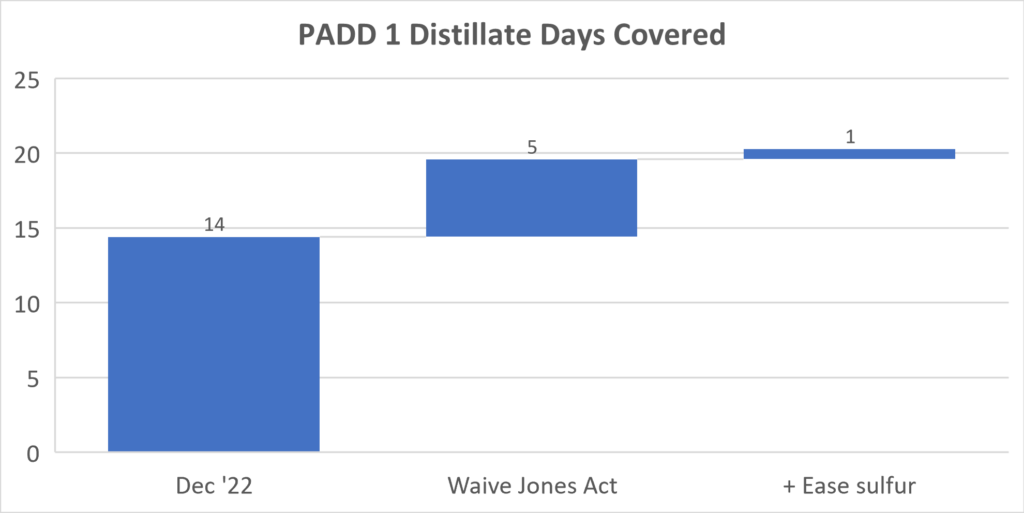 Another proposed regulatory relief is to ease the sulfur specification on PADD 1 (specifically the Northeast) heating oil. This relief, which also would require a Jones Act waiver to have incremental shipping capacity, would divert PADD 3 export volumes to PADD 1. Much of PADD 3 exports are low-sulfur (less than 15 ppm) so a sulfur waiver from 15 ppm to 500 ppm, would be roughly equivalent to increasing PADD 1 supply by about ¾ of a winter day’s demand.

While U.S. government regulatory could be swift, neither of these actions is likely to provide any meaningful downward pressure on PADD 1 prices. These actions simply shuffle volumes around the market. PADD 1 would still need to pay prices such that the volumes would be diverted from their current destinations. If successful, the markets losing U.S. exports would face the choice of destroying local demand these exports supply (through higher local prices or rationing) or find replacement volumes from other suppliers in the global distillate market.

Bringing price relief requires materially increasing global distillate supply, which will take time. One possibility would be easing IMO 2020 standards through the northern hemisphere heating season; however, this requires a global consensus among member countries and is merely some winter heating relief while the world middle distillate market remains materially short. Another opportunity could be building new renewable diesel capacity. It not only has zero sulfur, but also tends to have lower particulate emissions and relatively high cetane numbers. The challenge is sufficient investment to quickly build a material increase in capacity.  As long as the supply-demand balance remains tight (and potentially tightens further as EU sanctions on Russian product exports effect in February), there is little hope for consumer price relief.