Going Against the Grain

While U.S. refining has seen significant capacity reductions in recent years (see Table below), largely from COVID-driven demand destruction, and the conversion of refineries into renewable fuels facilities, ExxonMobil has bucked the trend in spectacular fashion by investing $2B in a 250 MBPD expansion at its refinery in Beaumont, Texas, which will increase its capacity to more than 600 MBPD. The last major refinery expansion in the U.S. prior to this was the Motiva Port Arthur Refinery expansion in 2012, which added more than 300 MBPD. Since the Port Arthur expansion, U.S. refiners have been reluctant to add crude capacity in the face of declining demand, an issue that further exacerbated the refining capacity shortage from the pandemic-driven shutdown.

The Beaumont expansion project was announced as part of ExxonMobil’s 2013 Growing the Gulf initiative to leverage the company’s oil production in the Permian, which was initially expected to grow to more than 600 MBPD by 2025. The project is now mechanically complete and is expected to start up by January 31, 2023, which is in-line with previous expectations.

This stands in stark contrast to recent announcements by others to shut down or convert capacity, most notably LyondellBasell’s decision to shutter its 268 MBPD refinery, just 73 miles away, by the end of 2023. While the ExxonMobil and LyondellBasell decisions nearly offset each other in capacity, the facilities are quite different in design. The LyondellBasell refinery processes predominantly heavy, sour crudes, while the ExxonMobil expansion is designed to process light, sweet Permian crudes. Against the backdrop of high crude prices in 2022 and 2023, the Permian oil production has recovered somewhat and has stabilized, with the expectation to grow over the next few years.

In addition to the ExxonMobil expansion, the Cenovus Superior Refinery is expected to come back online in 1Q 2023. The 50 MBPD refinery has been offline since the April 2018 explosion that shut down the facility. While this is not an increase in U.S. refining capacity, the restart will certainly add to refining supply coming onto the market.

At a time when the federal government is calling on refiners to expand U.S. refining capacity, the ExxonMobil Beaumont project and the Cenovus Superior Refinery restart are both bringing on refined product supply to offset recent capacity losses. As they’ve been in the works for several years, they are expected to come online at a time when demand should be higher than what would likely have been anticipated at the onset of the projects, and they go against the grain of U.S. refinery capacity trends in recent years.

Turner, Mason & Company tracks refining construction projects worldwide and their impacts on crude and product balances, along with light-heavy differentials. These are included in our Worldwide Refinery Construction Outlook. Our team is currently updating this Outlook, which will be published to clients in March. To subscribe to this Outlook or for more information about any of our other market research subscription products, please contact Sam Davis at sdavis@turnermason.com. 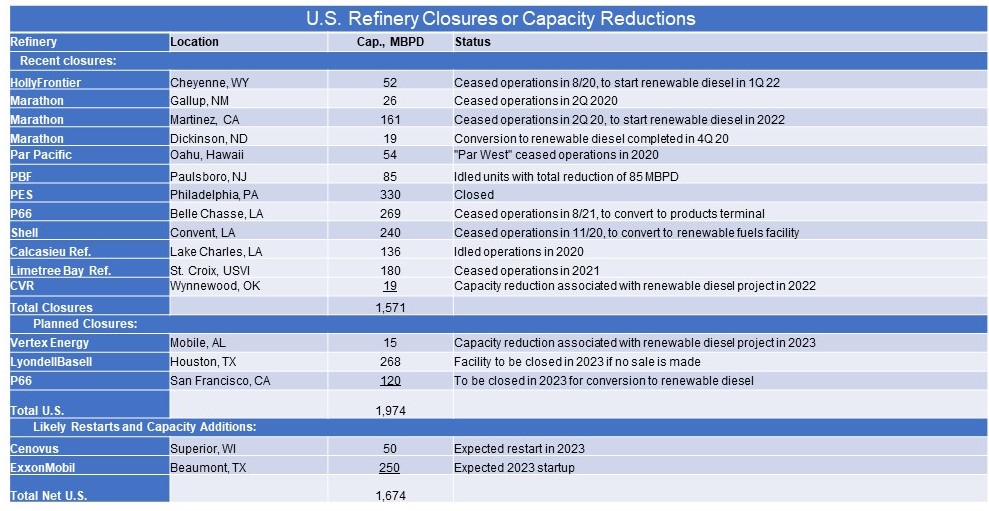